In the centre of Sulkava, the area between Lake Saimaa and Mikkolantie is classified as a nationally significant environment/tourist attraction. There are several gambrel-roofed buildings in the area, and traditional courtyards. This is also where the important sites for tourism are: the rowing stadium, boating centre Kulkemus, the harbour, the tourist information at cafeteria shop Alina, as well as Kästyöpuoti, a shop open in the summer and selling local handicrafts. 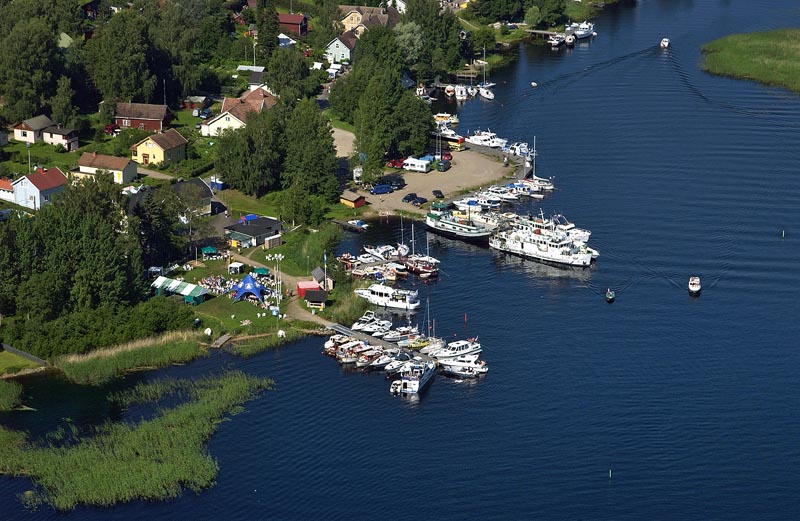 The Pisamalahti hill fort is one of the most valuable ancient forts in Finland. The remains of a defence rampart from the 12th century can be found on top of the hill fort. The hill fort rises to about 55 metres above Lake Enonvesi.

There is an excursion harbour, a barbecue spot and a toilet in the area.
A map link to Linnavuori here. 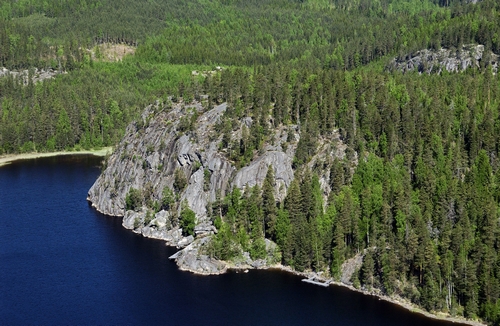 Vilkaharju is an approximately four kilometres long ridge area, regionally significant for its scenery, geology, and forests. It is surrounded by the waterways of Lake Saimaa, and located about five kilometres from Sulkava towards Imatra.

It has been a nature conservation area since 1978. 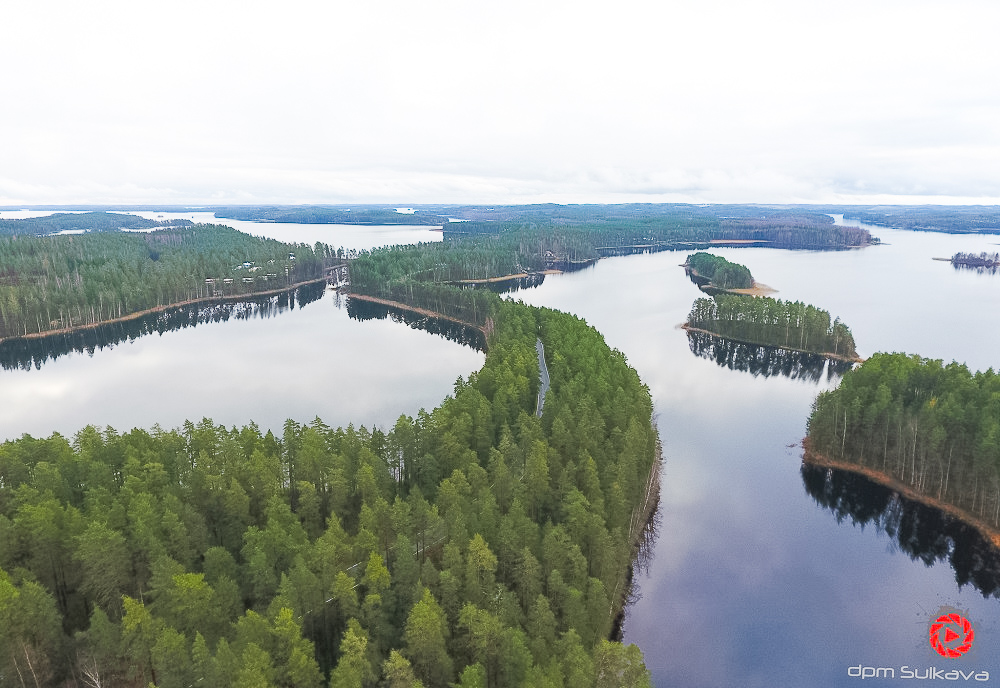 The wooden double cruciform church was built in 1822 based on the design by the state architect Bass. The bell tower dates back to 1770, and it was designed by Petrell. There is a burial chamber in the churchyard, built from the beams of the demounted old church, to protect the tombs of the Pistolekors family. 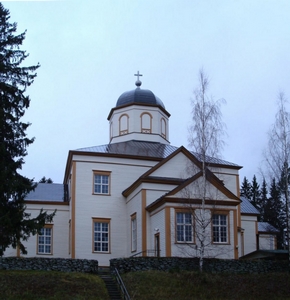 This so-called long church with a gable tower dates back to the 1930s. The church was designed by Ilmari Virkkala. 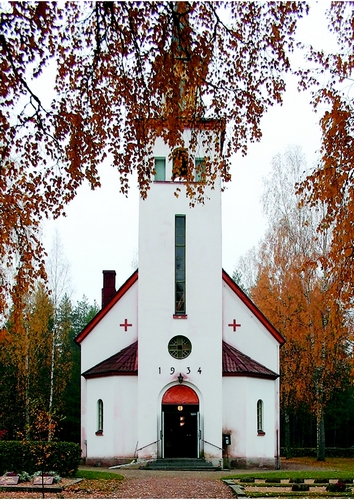 One of the so-called Suvorov canals built in the 1790s. The other canals are Kukonkanta in Puumala, and Käyhkää and Kutvele in Ruokolahti. The canals were built at a time when the boundary between Sweden-Finland and Russia crossed the Vekaransalmi inlet. The canals secured the travel from Olavinlinna castle to St. Petersburg.

Telataipaleen canal was renovated in 2007–2008 by the National Board of Antiquities and Historical Monuments. 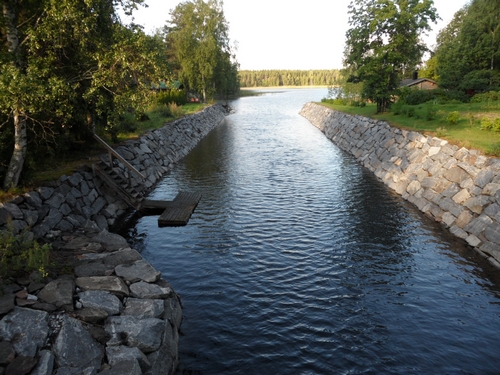 A large erratic boulder transported by the glacier during Ice Age. It has since cracked, forming caverns big enough to fit about 20 people in the largest one.

The stone church is 15 meters high at its highest point.

Along the path leading to the stone church, there is an arboretum hosting a memorial forest of foreign tree species planted in the 1930s. The saplings were donated by a local great man, counsellor Hämäläinen. The saplings were planted by the then pupils of the nearby Karjulanmäki school.

A map link to the stone church here. 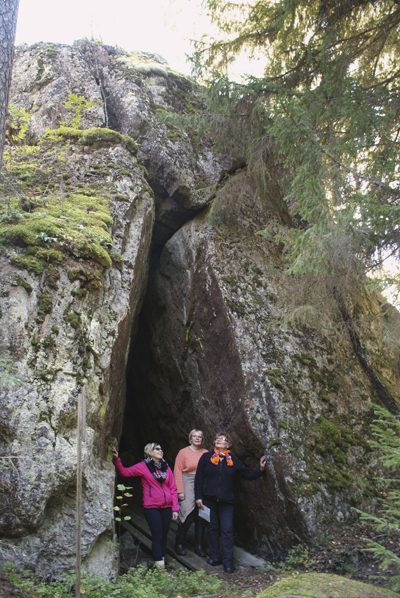 The Log-floating Museum, and a chimneyless hut that was transported from Kyrsyänsalo, with a courtyard. 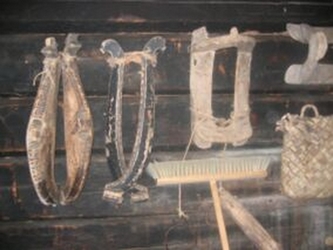 Julunkivi in Sulkava's Lohikoski, in the conservation area of old forests, is one of the largest erratic boulders in Finland. The height of the boulder is 12.5 metres, and the perimeter is almost 60 metres. Julunkivi is an excellent outdoor destination because of its location by Lake Saimaa, and the fireplace "under" the boulder. The boulder is about 700 metres on foot, on the hiking trail running through the forest.

A map link to Julunkivi here.

A monument of bygone generations

There are several prehistoric settlements in the area of Sulkava.
The locations of Stone Age settlements are marked with railing stones recycled from the old parish centre bridge.

In Sulkava, the Sarsuinmäki artillery batteries, as well as the Vilkaharju, Vekara, and Telakanava anti-tank obstacles belong to the Salpa Line. The website of the Salpa Line Heritage Society contains information about the Sulkava portion, as well. - The Salpa Line is being developed into a large tourist attraction.

A map link to the artillery battery here.. 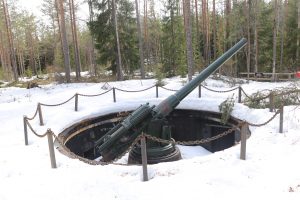 at Sairalanmäentie
A graveyard dating back to the Russian War (1788–90) of Gustav III of Sweden, where the soldiers who fell in the battle of Siikakoski in 1789 were buried. It is believed that there lie 303 soldiers, and one woman and one child.

There is a monument in the area with the text:
"Stop, traveller. Bare your head on behalf of your country. To the memory of the fallen 5/VII - 19/VII 1789."
In addition, in the corner of the graveyard there is a white wooden cross erected by the Sulkava Reserve Officer's Club, with the words: "In memory of the officers fallen in the 1789 battle 18.7.1954"

The cross for the soldiers of the Elfsborg regiment

A monument to the War of Independence and Civil War, in the parish centre churchyard.

In the 1990s, a memorial stone for the Red victims of the Civil War was attached to the cenotaph, with the names of the deceased Reds from Sulkava.

The message of this monument is to not only pay homage to Finland’s own discontinued money, the Finnish Mark, but to also to honour Finnish labour. The granite stone, brought there by the Ice Age, was found on a field in Kesohiekka, belonging to family Sinkkonen. The monument was created by an artist Mika Minkkinen from Kuopio, the planning was done by the then chairman of the village board, Osmo Sinkkonen, and the Lohilahti village association had it built. It includes a propeller blade of an old tugboat, an anchor, boom drill bits, and a Mark coin masoned on the base. The monument reflects the elements important to the village and the lives of the villagers: labour, water, and water transport. The Mark Monument was revealed on the 27th of July, 2001.

A map link to the monument here..

The Rowing Statue in the Sulkava market square area was revealed on the 4th of July, 2007.
The statue was designed by a Sulkava painter Olavi Uusitalo, and it was sculpted by sculptor Heikki Räsänen.

born 21 Dec 1879, died 13 Aug 1951
The tombstone is in the churchyard of the Sulkava Church. It contains the epitaph:
“TO A RESEARCHER AND FRIEND,
FROM THE SULKAVA MUNICIPALITY”

"TREASURE THE PAST"
Monument to Counsellor Hämäläinen in front of the Sulkava library.

The monument commissioned by the Telataipale Family Society of Hämäläinen from sculptor Heikki Räisänen was revealed on the 13th of August, 2011, precisely 60 years after the death of the Counsellor.